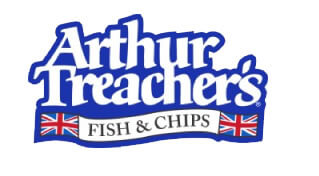 What Does an Arthur Treacher's Fish & Chips Franchise Cost?

What Options are Available for Arthur Treacher's Fish & Chips Franchisees? 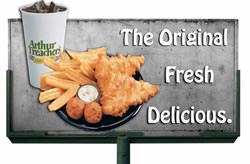 Arthur Treacher's Fish & Chips is the creator of quick-serve seafood. Offering up its signature batter dip't fish, shrimp, chicken and over sized french fries known as "Chips" since 1969, Arthur Treacher's Fish & Chips was founded in part by, among others, food service legend Dave Thomas. Over the years, the restaurant has built a tremendous customer following by maintaining its core menu, proprietary process and undeniably delicious secret batter diners crave. The concept currently has over 100 locations. 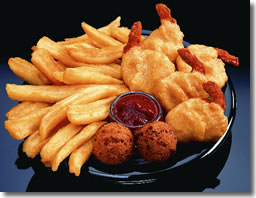 As an Arthur Treacher's Franchise owner you will be offering what is generally regarded as the world's first convenience food. The legendary combination dates back to 1865 when an enterprising London restaurant, Malin's of Bow, began wrapping fried whitefish fillets in newspapers for customers on the go. The oversized "chips," doused with malt vinegar were added later. Malin's was purchased by the original Arthur Treacher's, Inc. in 1969 and the first Arthur Treacher's Fish & Chips restaurant opened that same year in Columbus, Ohio. Through the years, the company changed hands and eventually was acquired by PAT Franchise Systems, Inc. in 2002 through a private transaction. The intellectual property was sold to NF Treacher's Corp., an affiliate of Nathan's Famous Sytems, Inc. in 2006 and TRUFOODS, LLC became the co-franchisor in 2007.

Though it does have strong roots in the past, market trends such as an increased consumer desire for non-beef products and the overwhelming appeal for nostalgic atmospheres indicate that your Arthur Treacher's Fish & Chips will have a bright and successful future.

We're looking for franchise owners who are outgoing and have sales, marketing, and/or management experience, and who are results oriented. A person who can build relationships, lead a team, and who has the motivation to excel! You must have a minimum of $200k in liquid capital, and be ready to make a full-time commitment with three(3)months.

Interested parties should have at least $200,000 in liquid capital to invest.