O donuts is an attractive, relatively simple, fun and profitable business, which is both affordable and therefore accessible to a wider range of prospective franchise owners. The franchisor has aimed for a clean, efficient, modern-looking and extremely customer-focused mini donut store, where fresh, hot, cake mini donuts are made-to-order and served with a variety of options, including being accompanied by some of the best organic, fair trade coffees that could be found.

What Does a O donuts Franchise Cost?

To buy a franchise with O donuts, you'll need to have at least $20,000 in liquid capital and a minimum net worth of $45,000. Franchisees can expect to make a total investment of at least $75,000. They also offer financing via 3rd party as well as a discount for veterans. *

Facts about this franchise: 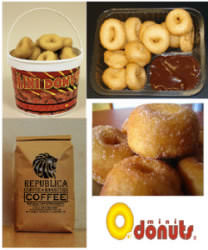 On Canada Day 2012, and with a staff of eight, Graeme opened the first O donuts store inside the Lonsdale Quay Market in North Vancouver, BC. Excited customers flocked to the brand new store and hundreds of mini donuts and gourmet coffees were sold. The business simply took off!

The new store lacked some vital equipment so after a two week break Graeme refused to give up and re-opened O donuts outside of the Lonsdale Quay Market! Under a canopy adorned with O donuts banners O donuts was back in action in the middle of a warm Vancouver summer. Every morning the mini donut machine and all supplies were lugged outside and every evening all the equipment was carted inside. Despite the logistics the store rocked! Locals and tourists came to O donuts in large numbers for the fresh, hot, made-to-order mini donuts and delicious coffees. The store and the staff had a certain 'buzz' and carried with it some of the magic that amusement parks have with their mini donut stands - except O donuts produces sizzling hot, fresh, little vanilla cake donuts which are made from higher quality ingredients. Graeme often jokes that "if mini donuts could ever be considered as 'gourmet' ours would be that!" 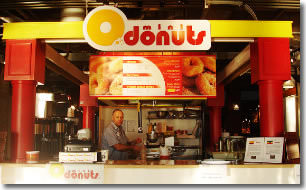 We produce hot, fresh, vanilla cake mini donuts made to order every day!

In addition to the old fashioned sugar cinnamon or plain varieties, we also allow you to accompany your mini donuts with molten chocolate, pure maple syrup or caramel fondue sauces for you to dip into!

Try a plate of sizzling hot, golden mini donuts with mini scoops of ice cream melting in the middle!

Combine a bag, bucket or plate of these little gems with a cup of our award-winning organic, fair trade gourmet coffee and it will truly brighten your day!! 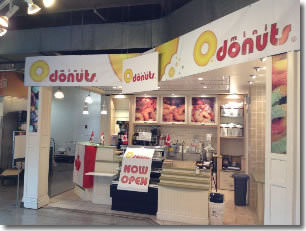 We're looking for franchise owners who are outgoing and have sales, marketing, and/or management experience and ability, and who are results oriented. A person who can build relationships with clientele, lead a team,be creative and dynamic, and who has the motivation to excel! You must have a minimum of $20k in liquid capital, and be ready to make a full-time commitment running your business until it takes off - which will be fast!

O donuts is currently accepting inquiries from the following states: