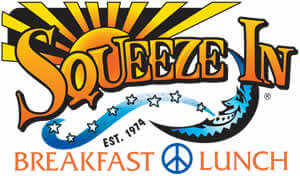 Breakfast franchising is hot! The breakfast segment grew by 13% in 2014 - more than 10 times the rate of the rest of the industry and, the breakfast segment accounted for approximately 60% of total foodservice growth over the last 5 years. That's a lot of eggs!

What Does a Squeeze In Franchise Cost?

Facts about this Franchise:

Do You Love to Win?

Then you're in the right spot. The Squeeze In has been dominating the breakfast and lunch game since 1974. Opened as a single unit in 1974 and exclusively mom and pop operated until 2004, the Squeeze In has been on a phenomenal growth track since 2008 with 14 locations sold, in development or operating. For scaling, our brand expansion is focused on Area Developers; Area Representatives and Multi-Unit Operators.

The Money Is In The Morning!

Breakfast franchising is hot! The breakfast segment grew by 13% in 2014 - more than 10 times the rate of the rest of the industry and, the breakfast segment accounted for approximately 60% of total foodservice growth over the last 5 years. That's a lot of eggs!

Why The Squeeze In?

Besides being a crazy fun, super simple and unique operation let's be real - you're an entrepreneur and a capitalist. You want to make money AND you want to be part of a winning, authentic, team of system and growth-focused entrepreneurs. Consider your home found. Plus the Squeeze In is a famous hot spot! Famous for "The Best Omelettes on the Planet," the Squeeze In has been featured on The Food Network's Throwdown with Bobby Flay and Fox Nightly News and in numerous television, radio, podcasts, magazine and newsprint articles nationwide (including The New York Times, Business News Daily and many others).

The money's in the morning. The breakfast and lunch category don't require high-paid, ego driven chefs; expensive cuts of meat or exotic wine lists. Breakfast & lunch operating hours allow for more profitable staffing, lower inventory levels and smaller overall space requirements. Think about it. One shift, no appetizers or desserts (aka - faster table turns), the top of the price chain and the hottest restaurant in town. No-brainer right?

With these advantages, your opportunity to be successful and profitable from the outset increases dramatically. Everyone loves breakfast. Brunch has developed a cult following and people will always be looking for the new cool place to eat brunch. Be the one to bring this concept to a new area and roll in the accolades and jealous looks you'll get when you say you're the one who brought it to town. Breakfast is the most important meal of the day.

We'll show you why "The Money's in the Morning." Fill out the form today!

We have more information on Squeeze In available today for you to review.

Squeeze In is currently accepting inquiries from the following states:

Interested parties should have at least $400,000 in liquid capital to invest.

If you're still considering Squeeze In, why not take a moment to learn a little more?