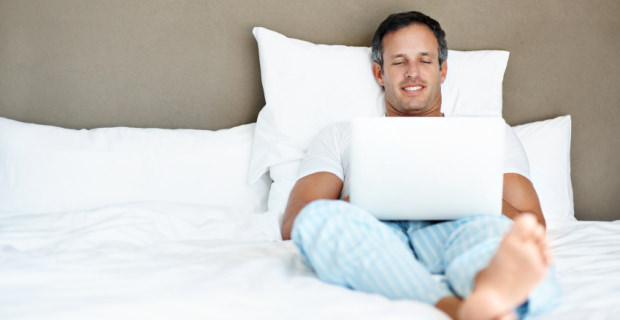 The debate rages on. Imagine two employee scenarios. In the first, a guy
gets up at 6:30. Showered and shaved, he gets all up in his
professional outfit and faces rush hour. Forty-five minutes later, our
man pulls into a spot and rushes to get to his desk. Scenario number
two: Joe Q. Public isn’t so public in this version. He sits down to work
from home at 7:30 am. Did he shower, shave and get dressed? Probably
not.

With anytime/anywhere computing, it’s easier than ever to get work done from home. But is there a productivity cost? It’s just been reported
that Hewlett-Packard CEO Meg “eBay” Whitman is quietly tightening up HP
work-from-home policies. Earlier this year, Yahoo CEO Marissa Mayer
caught major heat when she enacted a ban on telecommuting. Yahoo stock
prices are up, but neither public opinion nor the stats are in Mayer’s
favor.

Working from home (or the local Starbucks) is trending up in America. A
study from Global Workplace Analytics found that the telecommuting
workforce increased by a whopping 79.7% between 2005 and 2012.

Scott Berkun, who wrote the book "The Year Without Pants: WordPress.com and the Future of Work,"
says that given the veritable eons of time employees would gain if they
dropped the daily commute, why wouldn’t employers want workers to try
telecommuting? It has the potential to improve quality of life and
performance. Cutting out a daily 45-minute commute each way adds up to
375 extra hours per year. Sixty-three percent of employers now allow
workers to telecommute, according to the Families and Work Institute.

You’re probably thinking, are employees working or just “working” from
home; meaning, are they actually doing chores around the house or
catching up on other personal business? Employers can’t exactly install
NannyCams to find out what their workers are up to at any given moment.
But they can take steps to ensure that work is getting done. Measure
success not by hours on the job but by output. If an employee is
responsible for generating a weekly spreadsheet, that’s a deliverable
that can be measured. It’s on you as an employer to hire self-directed
people who feel a sense of ownership for your business.

Here’s the thing. Suppose your employee does take a break to greet the
kids when they get home from school. That is exactly the kind of thing
that makes for a happier worker. And a happier worker is more productive
and loyal.

If you are a taskmaster, you’re fighting a losing battle. If you
are keeping an eye on your staff’s online status every minute of the
day, your employees will quickly feel trapped, and you can accomplish
that feat just as easily at the office. So don’t blame the guy in the
boxers.

Farrah Kennedy knows franchise prospecting and knows it well. Having served as the General Manager at Franchise Gator, the leading on-line directory for franchise and business opportunity information, until December 2013, she managed all aspects of the business, including franchisor relationships, franchise leads, P&L and strategic objectives and growth, as well as taking care of Gator Crew who affectionally referred to her as 'GatorMom'.

Farrah began with Gator since almost the beginning - she was the first employee in October 2003. Before Franchise Gator, Farrah started her career in lead generation in 1997 with NewHomesDirect.com, a research site for potential new home owners where she served as the Director of Operations for 5 years.